It all started one of those really hot, blindingly bright summer mornings. The kind that marks the beginning of the Aussie summer and (best of all), the school holidays!

It was just after 9am and looking down at Tamarama Beach from my balcony actually made my eyes hurt. It was so glaringly bright. I could see bronzed groups of people making their way down to the sand, their bright towels trailing behind them. I could also see families (grandparents mainly) rushing down to stake out the shady white pergolas that were dotted around the grassy area behind the beach. As I looked into the cloudless blue sky I saw the beginnings of a plane starting some skywriting.

I took in a deep breath. The early sunshine, the warm breeze, the freedom of not having to go to school for six whole weeks - it felt like magic.

I walked out of my room directly across to Lionel’s room. I knocked on his door and heard a faint mumble from inside. I popped my head in - Lionel was lying in bed but was (very surprisingly) awake.

“Lionel,” I asked, “what do you reckon about a bit of exploring on the rocks before the tide gets too high and the day gets too hot?”

It really is 50/50 whether Lionel will ever come when I invite him to do stuff. Sometimes he needs peace and quiet and most of the time he’s just not that interested in joining my schemes and plans. But sometimes, sometimes he’s keen.

“Maybe?” Lionel said looking up at me, unconvinced.

“Half an hour tops - tide is coming in soon.”

Lionel sat up in bed and sighed loudly. “Do we have to take Beatriz with us?”

“Nah, we’ll just tell her we’ll play where she can see us. She’s probably watching TV now anyway and she hates going up or down those stairs like anything.”

As Lionel started to get up, I walked back to my room and yelled out to Beatriz who was in the living room, “Beatriz! We're going down to the beach, but we’ll be where you can see us!”

After hearing a faint ‘OK’ from Beatriz, I then waited outside for Lionel to get ready. He met me at our front door and we walked out of our house. We bounced down the million Tama Stairs until we hit a small park, crossed a narrow road and ran down to the beach.

I love doing a bit of beachcombing around Tamarama. I don’t quite know what it is about it to be honest with you. I just love finding washed up bits and bobs and imagining their backstory. We generally beachcomb under the northern cliffs right under the Tamarama Surf Life Saving Club. You can only do it during certain parts of the day because once the tide comes in you can easily get washed out to sea and then slammed back onto the rocks. Not good.

Lionel and I have found quite a few interesting treasures while exploring out on the rocks. An old belt buckle, frisbees, goggles, sunnies, half a (possibly shark-eaten?) flipper. Okay, okay, so not really treasures in the traditional sense. But you know. Of some interest.

Lionel: Yes, perhaps to someone who has been lost at sea for a few years and kind of lost their mind as well.

We started jumping across the rocks making our way under the cliffs. As I looked out onto the endless blue sea, I could only see a few surfers and a kayak in the water. A large oil tanker hovered far away on the horizon. I closed my eyes for a brief moment, enjoying the sound of the crashing waves and the salty spray hitting my face.

And then, just a few metres away from me in the water, I saw it. A dark green leather case bobbing around on the rocks. I quickly ran over and grabbed it before another wave could hit it. It looked like a small old-fashioned suitcase! The case itself was hard and it had a short leather strap that served as a handle. The top of the case had a metal panel with a latch, a number lock and a small square button. The number lock was sitting at 00000. I tried pressing the button to open the latch but it wouldn’t budge. It looked like this: 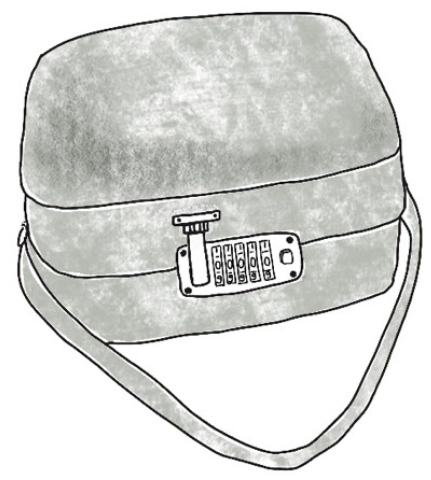 “Gosh, this is a find!” I exclaimed, “I wonder if someone dropped it just now?”

“Hmm, it’s been in the water for a little while,” said Lionel as he took the dripping case from my hands and looked at it closely, “Maybe around half an hour? It’s hard to know for sure without having a look inside.”

As we stood there, the waves started to crash into our legs with more and more force, so we ran out from under the cliffs and back onto the sand. I glanced around to see if anyone looked like they had lost something, but all I could see were groups of relaxed sunbathers.

We knelt down on the hot sand. Lionel placed the green case down in front of us.

“So, it looks like to open this thing we need to know the right five numbers.” I said.

Lionel shrugged his shoulders, reached out for the case and turned each number dial on the lock to match the numbers 12345. He then pressed the button. The latch didn’t move.

He tried that as well, but the latch remained still.

“Lionel, how many combinations are actually possible?” I asked.

“Oh gracious!” I sighed, and collapsed back onto the sand, closing my eyes for a moment. I then opened them up and looked out into the clear blue sky above.

Except, the sky wasn’t clear. Floating in the sky, far above me, I could see the numbers 31773. I blinked a few times to make sure I wasn’t seeing things. Then I remembered the skywriting plane I had spotted from my balcony earlier on.

“Hey Lionel! Look up.” I cried pointing above. “Do you see the skywriting up there? It says 31773! That’s five numbers. Why don’t we see if that works?”

Lionel looked at me and scrunched up his nose, “Leonie, why would a skywriter, hundreds of metres above us know what the code to this small suitcase is? That makes absolutely zero sense.”

Lionel shook his head and fiddled around with the number lock on the case. He lined up the dials to match the numbers 31773, pressed the button and ‘ping!’ The latch flew open.

Lionel looked at me in disbelief. “What the..?”

I looked up at the sky again. A strong breeze was blowing and the numbers written in the sky were already starting to drift away.

I stared at Lionel in shock, and then looked back at the case.

As I reached out to open its lid I heard a stern, “Hey! You two!”

I immediately froze in my place and thought, oh no, this person thinks we’ve stolen their case!

We both turned around waiting to be yelled at by an angry stranger. But instead, towering over us blocking out the sun, was Beatriz.

“There you are! My goodness you two gave me a heart attack. ‘We’ll be where you can see us’ Ha! I won’t be falling for that one again. I thought you’d been swept out to sea! I thought you were drowning. I thought you had died!” She took in a few deep breaths as she tried to calm herself down. After a few moments she collected herself and said rather sternly, “Come on home you two. Now!”

Lionel and I looked at each other silently. It was no time to argue. I closed up the latch on the green case, took hold of the strap and started to trudge back home. Beatriz was in a bit of a huff so she was trying to walk very fast across the hot sand but instead of moving more quickly, she was just getting herself more and more bogged down. I struggled to hold in my laughter.

We finally reached the end of the sand, made our way across the grassy area with the pergolas, crossed the road and reached the start of the Tama Stairs. Beatriz sat down on the bottom step. She was exhausted.

“You both go on ahead, I’ll get there sometime today,” Beatriz puffed as she gestured for us to climb up home.

Lionel and I lost no time. We raced each other up the Tama Stairs (I was at a bit of a disadvantage as I was lugging the green case), entered our front door and ran straight into my room. We were both bursting with excitement to see what was inside.

LIONEL: I wouldn’t say I was bursting with excitement. I was kind of interested.

I placed the case on the ground and pressed the button on the lock again. For a second I thought it wouldn’t work twice but the latch flung open.

I opened the lid of the case.